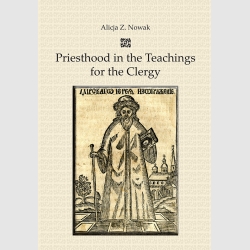 Priesthood in the Teachings for the Clergy

Zapytaj o produkt Poleć znajomemu Specyfikacja PDF
In the history of the Polish-Lithuanian state the 16th century was a period of change in many areas: political, social and religious. The change affected all people living in the ethnically diverse and multidenominational country. The emergence of Protestantism and the break-up of the Western Church and, especially, reforms encompassing changes in the liturgy, expansion of the use of vernacular languages, updating and enrichment of preaching as well as school curricula influenced religious life of both the Catholics and the Orthodox. Both groups of believers saw a need for counteraction; they were redefining traditions and found inspiration in novelties. Another challenge for the Orthodox Church – controlled as it was by Catholic rulers and affected by unification with Roman Catholicism – was the need to fight to preserve its identity. (…) The problems tackled in the present book have rarely been explored by scholars, mainly those from other countries. In Poland virtually no research has been carried out in this field. Thus the book should fill the gap in the knowledge of the course and outcomes of Orthodox Church reforms in the Polish-Lithuanian state, and, above all, verify stereotypical ideas about the form and course of the reforms.